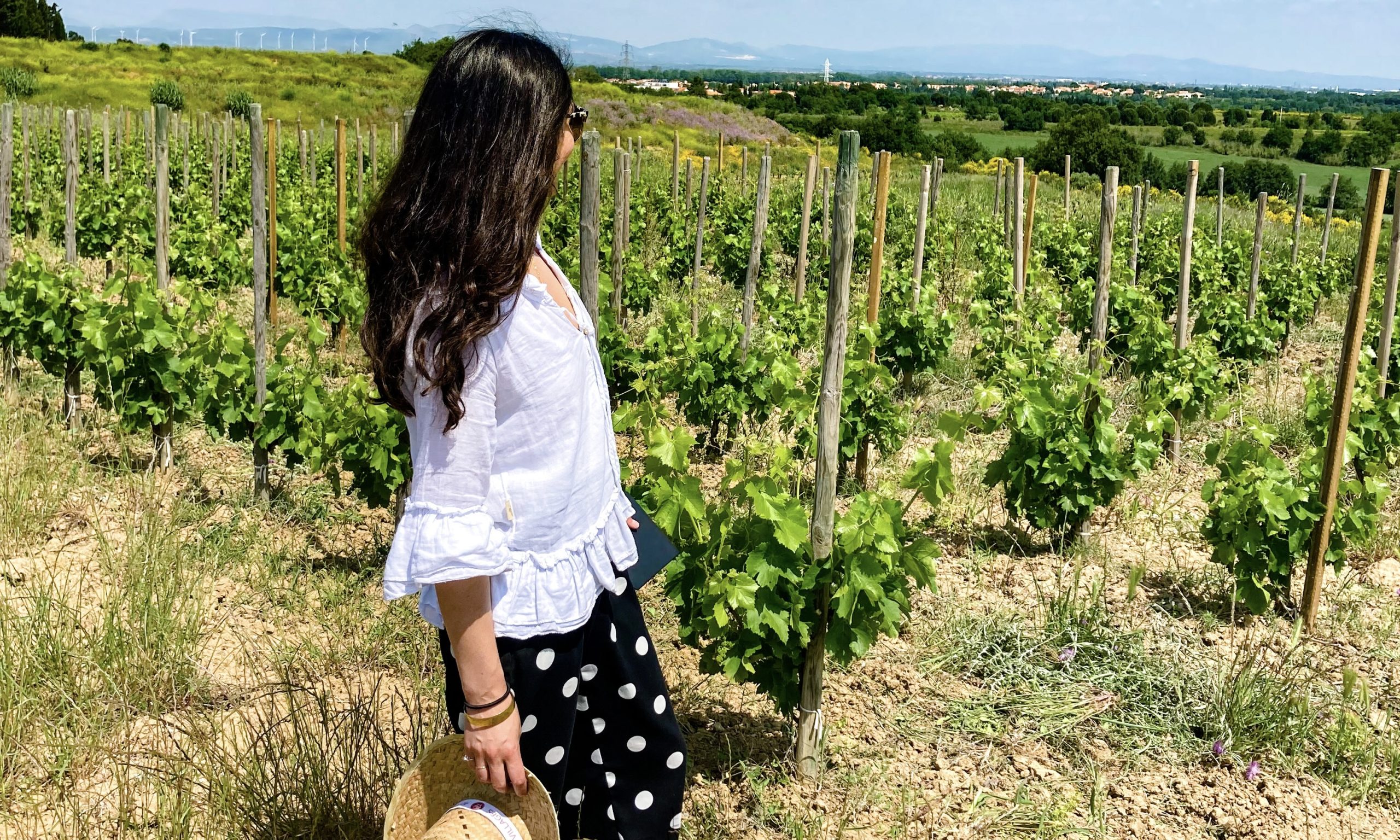 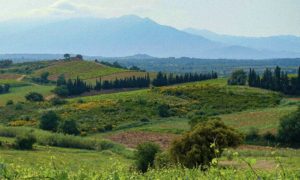 “Our place, Roussillon, is not very known in the wine world, but we produce a nice quality of wine,” says Bertrand Cherel, somewhat humbly. Cherel is the Director General (and a winemaker by trade) at Les Vignobles Terrassous, a co-operative winery comprising of 70 families of winegrowers in the Aspres hills. Originally from the Basque Country himself, Aspres is close to the Spanish border, though he was drawn to Roussillon because of the quality of the grapes.

The dry climate and undernourished soils results in low yields, explains Cherel. “We don’t have a huge crop, so aren’t able to make big volume, low quality wine. We have to make good wine, because if you don’t make good wine, there is no business.” 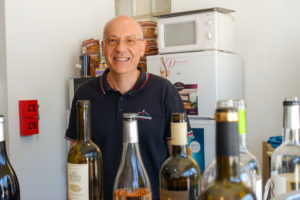 The reality of low yields and high quality wines in Roussillon contrasts sharply with the old reputation of the Languedoc-Roussillon region for mass-produced Vin de France wines. While it is true that, historically, the Languedoc-Roussillon seemed to provide table wine for the rest of France, the wine coming out of the Roussillon area was only a small fraction of the production (about 10%). Made from different grapes and influenced by different soils, landscapes, history and culture, it seems unjust that these two very different regions were seen as one of the same. Since the 1990s, Roussillon has embraced its individuality and been able to show the world what Roussillon wine is really about.

Cherel explains that the co-operative wineries in the region attract talented viticulturists because the co-ops can pay them well, which drives up the quality of the winemaking across the area. “We have good viticulturists here, who then teach the others.”

“Roussillon is where we use the most New World techniques, because the winemakers have travelled,” continues Cherel. “There is room to try different techniques because here we don’t have the weight of history.” Cherel explains that the new technology is complimentary to local know-how.

Since moving to Roussillon, Cherel has been able to appreciate the region’s distinctiveness. “Now that I live in the area, I see the landscape is fabulous. It’s very, very unique.”

Roussillon is certainly striking. It’s an amphitheatre, with the Mediterranean as its stage and three mountain ranges sitting in the audience facing it: the Corbières to the North; the Pyrenees to the west and the Albères to the South. There are also three rivers (the Agly, the Têt and the Tech) that cross the amphitheatre from North to South. All of these landscape features cast their own influence on the different wine growing areas, making for varied terroir across the region and, in turn, a diversity of wines and styles.

Still in the Aspres appellation, but in the last terrace of the flatter part, just before you reach the sea, is the Mas Bécha estate. It is the image of biodiversity, with butterflies everywhere, fluttering over colourful flowers and grasses. Of the 110 hectares, only 30 percent is vineyard and just as much effort goes into working the rest of the land to preserve this special environment.

This vision belongs to Charles Perez, who took over the family estate in 2008 and converted to organic. Though he specialises in plot selection wines across three different sites, Perez believes that the human element of terroir is just as important. “In the New World style, it’s the winemaker that makes the difference,” says Perez. “I want it to be about my winemaking philosophy; my vision is very important.” 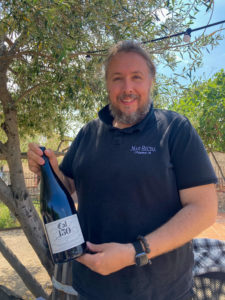 The Mas Bécha specialises in fresh, elegant wines, with the fruit front and centre – a huge stride away from the overripe, spicy and oaky wines that the region might have been associated with in the past. “The quality of the wine comes also from the parcel and the techniques, not from the oak ageing,” says Perez.

The Mas Bécha labels are quirky and eye-catching, with illustrations of family members gracing each bottle. ‘Roussillon’ is emblazoned across the bottom of each one, a word now proudly standing on its own. “I think it’s important,” Perez says.

Matthieu Collet from Domaine Fontanel echoes that it is important for the consumer to see that Roussillon is separate from the Languedoc. “We are Catalan,” he says. “We have been French only from the 17th century.”

Collet is proud of the distinctions that helps Roussillon to produce high quality wines. “80 per cent of our terroir is on slopes. Another difference is the age of the vines – Roussillon has old vines – very often up to 80 years old.” 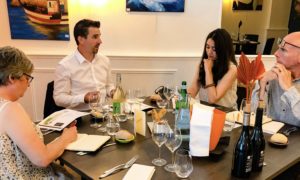 Collet’s Tautavel domaine is situated in the foothills of the Corbières between the Mediterranean and the Pyrenees. Producing Côtes du Roussillon Villages wines, 20 of the 30 hectares at Domaine Fontanel are covered in vines and the yields are kept low, often less than 30 hectolitres per hectare. The focus is on high quality wines made from organic grapes.

“We feel connected to the land,” Collet says. Whichever expression they choose for each wine, be it traditional or modern, Collet explains that it is fundamental for them to “keep their feet in the terroir of Roussillon”.

Like many Roussillon producers, a lot of the interest in them comes from abroad. “Tourists and fairs are very important,” explains Collet. Domaine Fontanel have just opened to the local market – in restaurants – this year. It’s taken a long time, but perhaps Roussillon as a region is finally realising its own value – just as the rest of the world is looking for a rooftop to shout from. 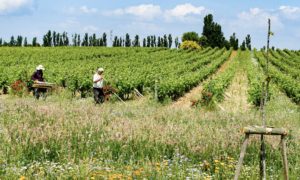 Sophia Longhi is a wine communicator, writer and wine tastings host. She is the winner of the IWSC Emerging Talent in Wine Communication Award 2022.

Read her blogs and find out more at www.skinandpulp.com. 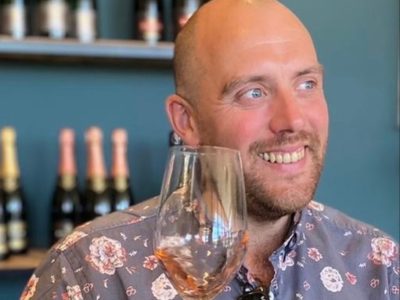 Roussillon: a mosaic of terroirs, vines and people 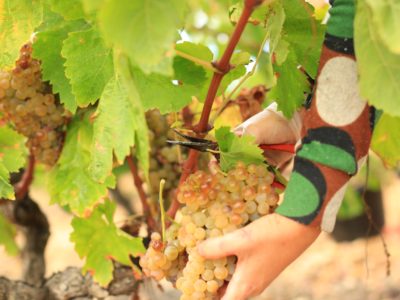